The beautiful ancient Greek city of Aphrodisias, still partly excavated, is one of the most important archaeological sites of the late Hellenistic and Roman period in Turkey. The city was located in Caria in Asia Minor, on a plateau 600 meters above sea level. Today it lies near Geyre village, some 80 kilometers west of Denizli. The city was founded in the 2nd century BC on the site of a rural sanctuary of Aphrodite, the Greek goddess of love. It was named after Aphrodite who had her unique cult image, the Aphrodite of Aphrodisias, and who became the city’s patron goddess.

Octavian, from a Letter of Octavian to Stephanus (governor of Laodicea) concerning Aphrodisias, c. 38 BC

In the 1st century BC, Aphrodisias came under the protection of Augustus, following the return to the city of Zoilos, an Aphrodisian who had been made a free man by the Roman emperor. Zoilos had become a very wealthy man when he returned to Aphrodisias in 40 BC and this initiated a period of prosperity and growth. He was responsible for the planning of much of the civic centres of Aphrodisias and of many of its early monumental projects. The ruins that remain today reflect this period of wealth which lasted until the 6th century. They include a Temple of Aphrodite, a theatre, a large Agora with its associated Bouleuterion (council house), a bath complex and a stadium. 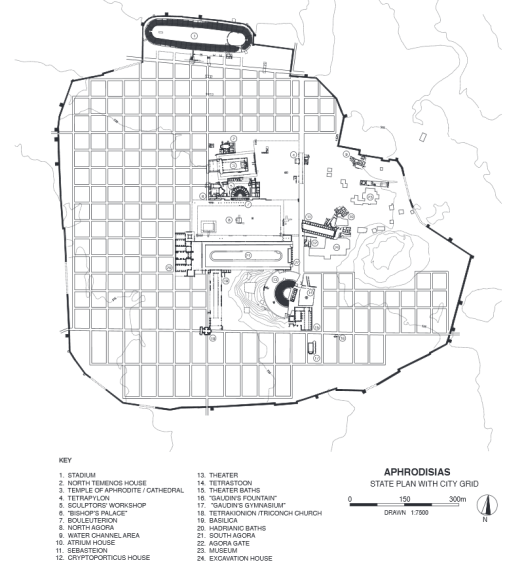 A nearby marble quarry provided the ancient city with a supply of high-quality white and blue marble and a school of sculptors flourished in Aphrodisias and rose to prominence under Hadrian. Aphrodisian signatures have been found on sculptures in Italy and Greece, notably on the Centaurs discovered at Hadrian’s Villa.

The Baths at Aphrodisias

Hadrian visited Aphrodisias on one of his journeys to the Greek East. The city’s council had baths constructed as a memorial of his visit. They were constructed on the Roman model, with a series of parallel vaulted halls. Directly in front of the entrance on the north side was a marble pool ornamented with statues and with large pillars at the corners.

The parallel vaulted rooms were, in order, the apodyterium (changing room), the frigidarium (cold baths), the tepidarium (warm baths) and the calidarium (hot baths). The lower walls of these halls, which are still standing, were built out of huge limestone blocks and faced with marble. The vaults, which no longer survive, were made out of mortared rubble, plastered on the underside. The floors were lined with marble.

The first excavations on the Hadrianic Baths were undertaken in the year 1904 by the French engineer, amateur archeologist and collector Paul Gaudin. A portion of the works unearthed in the course of this excavation were moved to the Istanbul Archaeology Museum, while some were removed from the country without permission. A marble torso, part of the Old Fisherman’s statue which was discovered there, was sold to Berlin’s Pergamon Museum by Gaudin’s heirs (while the head was discovered only in 1989 and remains in Aphrodisias). Today, the Old Fisherman’s torso is on display in the Altes Museum, Berlin.

The baths were richly decorated with sculptures, including mythological statues depicting Trojan themes around the pool, architectural decoration of the highest quality in the palaestra and in the front portico.

The bath complex was carefully maintained throughout antiquity and was still functioning in the 6th century AD when it continued to attract wealthy sponsorship for its redecoration. The complex was both a bathing facility and a museum of marble statuary.

The statue group (image above) depicts the hero Achilles supporting the Amazon queen whom he has fatally wounded and fallen in love with. The stab wound under her right breast was carefully carved and painted.

The long-lived Hadrianic Baths provide an unparalleled opportunity to examine the evolution of statuary decoration in imperial bath complexes over time.

A  major  conservation  project  in  the  Hadrianic  Baths begun  in  2010 under the auspices of New York University and the Institute of Fine Arts. Work has been focused mainly in the rooms with hypocausts and walls were restored. Sadly a large part of the baths was fenced when I visited the site last month and all the vaulted rooms were inaccessible. The images below show some of the rooms of the bath complex after conservation in 2013 (source).

Carole Raddato's favourite hobby is travelling and for the last 8 years she has taken a huge interest in the history of the ancient world. She has dedicated all her free time to this passion. She loves to share with other history fans all the incredible facts and stories that she discovers throughout her journeys. She is neither a professional photographer nor an ancient history scholar, but she hopes that everybody can enjoy her photos. She is particularly interested in everything related to the emperor Hadrian whom she finds fascinating. He was himself an incessant traveller, visiting every province in the Empire during his reign. When Carole is looking for new ideas for her travels, she usually takes inspiration from his journeys and it is a great motivation for her to follow him in his footsteps.

View all of Carole Raddato's posts.