We know many things about history, but what we don’t know outweighs what we think we know. Throughout my travels, I have come not only to embrace, but to seek out history’s mysteries. If your eyes and your mind are open you can find mysteries whenever and wherever you travel. Malta is one of those places where the mysteries are too numerous to count, and the culture is too rich to understand in just a few days. Out of the hundreds of unique sites and artifacts found throughout Malta, seven are highlighted below that pose more questions than answers.

The Sleeping Lady is 5,000 years old. When you stop for a moment to pause and think about that span of time, that figure is remarkable. More questions remain about the Sleeping Lady than have been answered. Does she represent death? Meditation? Sleep? Why was she created? What was her purpose? Was she an offering to the Gods? The Hypogeum of Hal-Safleni is an underground chamber and a place of deep spiritual significance. Recent evidence indicates that the underground chambers in the Hypogeum were specifically carved to achieve acoustic frequencies that induce a meditative state.

How did a culture over 6,000 years ago track the equinoxes? We don’t know, but they left behind a snapshot of their work on a megalithic stone at the temple of Mnajdra at Qrendi. How were the equinoxes tracked and recorded? Why were they tracked? Who was in charge of tracking such events? Mnajdra is considered one of the oldest religious sites in the world. This UNESCO World Heritage Site is one of the only archaeological sites in Malta that is protected by a tent. I was annoyed at first, that the views of such an amazing place were obscured by a white tent. Upon closer examination however, it is obvious that these intricate carvings would eventually disappear if left exposed to the elements of wind and water.

This is an uncommon find in Malta. No one knows exactly what it was used for or what it represents. Is it a crude image of a long dead Phoenician? Is it a figurative representation of death? In the Phoenician world some images are meant to ward off death, could this be such an image? Or are the tightly slit eyes and mouth meant to prevent death from getting in?

This limestone sculpture is the oldest representation of a temple in the world. It is from the Hagar Qim group in Malta and dates to about 3300 BCE. We know that this tiny temple is a true architectural rendering of the some of the larger megalithic structures in Malta. What we don’t know is why it was made. Is it a kind of draft for a life-size model? Is it an offering for the Gods? Is it a child’s toy?

The Venus of Malta was discovered in the Hagar Qim temples (3300 BCE) and is from the same time period as the miniature temple above. A common consensus is that these Venus figurines represent fertility. Thousands of these Venus figurines have been found all over the world. The most famous of which is the Venus of Willendorf, which dates to 25,000 BCE! We know the age of these figurines but we don’t know their purpose. Was this meant to represent the worship of a mother or fertility goddess? Was it something kept in the home? Was it used in a religious ritual?

This dagger was found in a nearly inaccessible cliff-cave below Dingli, Malta. We do know that there was a thriving Bronze-Age culture in the area, but we don’t know why they chose this cave to deposit their artifacts. When I first saw this dagger I imagined that it looked like something from the Trojan War. I later discovered that Mycenaean pottery shards were found in the Bronze Age village where this dagger was discovered. Did my subconscious pick up just the slightest Mycenaean-Greek influence in the artwork of this dagger? Perhaps. Why was this dagger deposited in this cave? What was its purpose? Finally, what does the circular pattern on the hilt mean? Did the Mycenaean Greeks actually influence this design, or is that wishful thinking on my part?

These statues raise more questions than they answer. Are they male or female? Why do they all have one hand over the abdomen? They have holes in the neck; did they once have interchangeable heads? Hundreds of these figures have been found in Malta, all without heads. What happened to the heads? Maybe one day an archaeologist in Malta is going to discover a pit of disarticulated heads that fit all of these statues.

I hope that you have enjoyed this discussion of these unique artifacts from Malta. I can’t wait to go back for a second visit with keener eyes. I will be teaching 9th grade World History this year so my blog may not be as active as it once was, but it’s not going anywhere, and neither is my love of the mysteries of history! 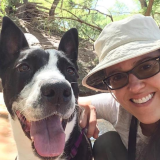